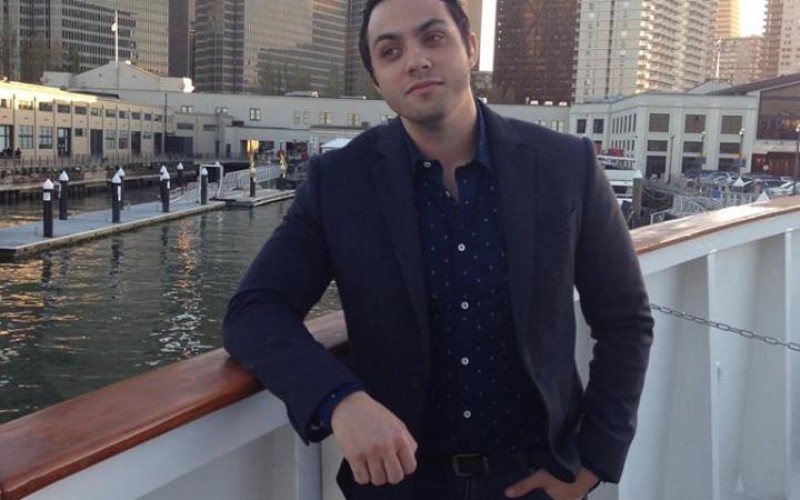 On Episode 22 of B-Movies and E-Books, we reviewed Just A Little Terrible by Vincent V Cava. This collection of flash fiction was a glorious sampling of a promising writer showcasing his talent in a variety of grim little tales. Suffice it to say, we were floored by this author and immediately reached out to him for an inside scoop:

B&E: We thought long and hard about the perfect author to feature for our first web interview but after reading Just A Little Terrible, it was clear that we needed to reach out to you since it was such a strong effort by a relatively new author. You are not quite a household name yet but that will change shortly if you continue to produce such amazing content. So, for the uninitiated, tell us a little about yourself.

Vincent V. Cava: Oh wow! You mean to tell me I’m your first? You guys can’t put that kind of pressure on me. It’s like my junior prom all over again. Hopefully this time I don’t black out before I finish!

I guess I would describe myself as an avid reader of sci-fi and horror. I’m a self-professed “nerd” who loves to talk about sci-fi movies and comic books ad nauseam. I also have a tendency to overanalyze books, which makes me think I should have become a English-Lit professor. I write horror. It’s a genre that gives me a lot of freedom to work in. Plus, it’s fun. Who doesn’t enjoy musing about reanimated corpses, giant insects, and blood sucking cannibals?

B&E: It appears that your first book, Decomposing Head, was published in 2014 and have released four books of short stories since then. That is quite prolific! What is it about the short story that draws you to it as an author?

Vincent V. Cava: Make that 5 books! Dead Connection just came out June 27th. Although, I can’t take all the credit. A few of those books are collaborations between myself and other authors. I just put my name on the cover!

Short stories are a wonderful medium to work in. I have so many tales I want to write! Short form fiction allows me to crank them out quickly so I can move on to the next one. The other great thing I’ve learned about short stories is that they’re a fantastic tool to attract new readers.

B&E: Do you have plans of releasing any full-length novels as well?

Vincent V. Cava: Of course! I’ve got a novel I’m putting together right now. I’ll definitely be shopping the manuscript around once it’s finished, but if I get anxious I might just stick it on Amazon myself. I’m really excited about that project. I also plan on putting out a YA horror series later this year. If I could describe those books I would say they’re Goosebumps-esque. So stay tuned. There’s a lot more from me to come!

B&E: Your mix of fright and humor is a welcomed surprise. On the podcast, we said that some of your work was reminiscent of Jeff Strand, a B&E favorite, but it is clear that you have a very unique voice of your own.  Who do you cite as your biggest influences and what made you want to start writing?

Vincent V. Cava: Well, that’s a hell of an author to be compared to! He writes some of the funniest dialogue I’ve ever read. To be honest, I’ve always been kind of a cutup. I think the humor is just my personality leaking into the stories I write.

I write because I enjoy it. It’s therapy to me. I’m the type of person that needs to “create” something. Finishing a story gives me such a sense of completion. It’s one of the best feelings in the world.

My major influences would include Philip K. Dick, Stephen King, and Oscar Wilde although there are so many others and I wouldn’t really liken my prose to any of them. I “borrow” the things I like about the authors who I enjoy reading. Then, I throw it all in a pot, mix it up, what you get is my “unique voice”. I suppose this isn’t uncommon in writing.

B&E: Self-publishing has traditionally been regarded as a business built on vanity. As the E-Book revolution continues, this stigma has almost become a moot point to the general audience. In fact, many of the biggest sellers on Amazon are self-pubbed authors. What do you feel that the strengths of self-publishing are and what are the drawbacks? Also, do you plan on pursuing a traditional publishing deal or have you found exactly what you want as a self-published author?

Vincent V. Cava: Haha, you’re opening up a can of worms now! If video killed the radio star then the Internet currently has its hands around the throat of the publishing industry! Just look at the sorry state newspapers are in. I had a sales rep from the LA Times call me up yesterday. He told me he was willing to wash my car if I ordered a subscription. He said that if I signed up for the 18 month option he would even throw in his daughter’s hand in marriage.

As for books, I’m surprised it’s taken this long, but Amazon is still figuring things out with their Kindle Unlimited program. By the end of the decade, digital downloads will make up a much larger share of the book market and indie publishers will be selling more books than ever.

It’s an amazing revolution we’re witnessing. The Internet allows independent authors – writers the average consumer may never have even heard of – to get their work out to the masses. It’s crazy to see my books ranked next to Chuck Palahniuk or HP Lovecraft.

The whole thing draws parallels to what’s going on in the music industry. YouTube has helped independent musicians to get their art out in front of millions of people. These digital distribution platforms are allowing the “little guy” to catch up and I’m loving it! The only drawback right now is the stigma that independent authors aren’t as “good” as mainstream writers. I’m not going to lie, there is a lot of garbage out there, but the cream finds a way to rise to the top. Plus, it’s not like publishing houses aren’t above putting out subpar novels. It is a business after all.

Publishers chase money and that means they aren’t afraid to latch onto a title even if it isn’t the best quality content they could be putting out. I don’t want to put another writer on blast, but 50 Shades of Grey is a HUGE book that has definitely received its fair share of criticism. Sure it’s making money, but when publishers put out books for the soul purpose of “cashing in”, then bibliophiles will look elsewhere for “quality content”.

I do plan on going the traditional route when it comes to my novel though. Working with publishing houses opens up a lot of doors that aren’t available to me at the moment. I want my work to be available to as many people as possible. If that means getting my books on the shelves of Barnes & Noble, then so be it.

B&E: This might be the hardest question, but imagine that you are stranded in a remote location with only five pieces of entertainment to consume over and over for the rest of your life. They can be either movies, books, or albums. What are they?

Haha, that’s a hell of a list you made me come up with. I know a couple of those come as a surprise!

B&E: What is next in the pipe for you?

Vincent V. Cava: Fine, I’ll let the cat out of the bag. I’m putting out a comic book. It’s a horror anthology in the same vein as Tales From the Crypt. It’s called “Creepypasta” and some of the stories will be based off of the famous Internet properties. I’ve teamed up with the YouTuber/voice actor, Mr. Creepypasta and artist Chris “Oz” Fulton.

B&E: Where can we find out more information about your books?