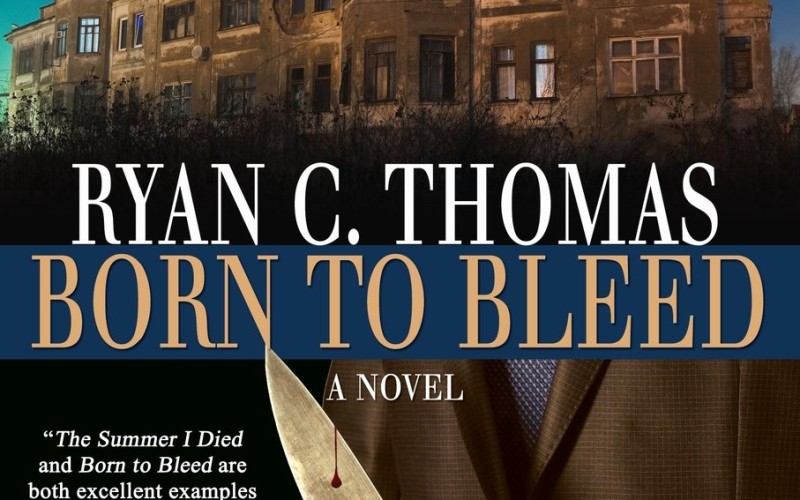 When I read The Summer I Died, I was shocked by author Ryan C. Thomas’s ability to completely annihilate the lines of human decency while still remaining relatable. It was as if it were written by an author that was equal parts pop culture junkie and raving maniac. Despite the fact that I enjoyed this book immensely, I will be the first to admit that the devil was in the details and the plot was a bit light. So when I recently read Born to Bleed, the sequel to The Summer I Died, I was expecting that this novel would employ a similar style, but what I got was so much more.

This book picks up roughly a decade after the events that unfolded in The Summer I Died. Though Roger Huntington has grown up, moved to California, and is living out a semi-successful career as an artist, he remains psychologically broken by the events in the first book and haunted by memories of his dead best friend, Tooth, and the evil Skinny Man that subjected them both to unimaginable cruelty. He often sees manifestations of these two characters from his past and they help guide him on his way to save his dream girl from being kidnapped and subjected to unspeakable horrors.

At roughly 200 pages, this book was a relatively quick read, but still a gripping experience. Thomas made it clear during the middle of the book that every single expectation should be thrown out the window to clear a path for this multi-genre action-packed thrill ride. Almost every time that I expected something to happen, the story took a road less traveled. Even after the denouement, he managed to subvert my expectations and pave the way for a completely new adventure.

I’ve allowed this story to digest in my brain for the past week and the only negative thing that I have to say about this is that I am afraid that some of the readers might be turned off by the gratuitous nature of the first book and write off the entire series. But in any event, that is a problem that some readers may have, not a problem with the story itself.

Ryan C. Thomas has been around for a while but after reading Born to Bleed, he has grabbed my attention and I plan on reading his tales as long as he plans on releasing them.

If you would like to hear a more in-depth review of Born to Bleed and an interview with Ryan C. Thomas, please tune into Episode 23 of B-Movies and E-Books!