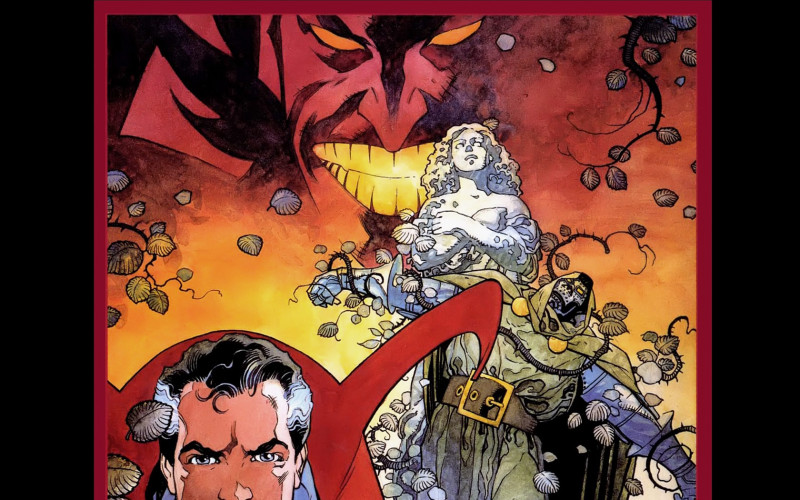 I’ve always been a DC guy, in fact, I am pretty sure I learned how to read from Batman comics. Every so often though I try Marvel again. This latest excursion across the isle was instigated by the recent Secret Wars event where Dr. Doom becomes God and remakes the universe in his own image. Expectedly, this is happening almost at the same time as DC’s similar event so it caught my interest. Maybe one day I will go into how I feel about those two, but let’s just say I ended up reading Hickman’s entire Avengers and New Avengers runs and hardly any of the Convergence tie-ins. Coming out of all of this is a new found love for Doom. One of my favorite parts has been the interaction between Doom and the now Sheriff Strange, so I looked at the past to where it all began, a reboot or two ago, in 1989.

“Dr. Strange and Dr. Doom: Triumph and Torment” written by Roger Stern with art by Mike Mignola was released in 1989 by Marvel as a graphic novel. It starts with the Aged Genghis (the world’s oldest sorcerer) calling forth all of the Earth’s mightiest magic users to determine who will become the Sorcerer Supreme. The only two to pass the challenge are, you guessed it, Dr. Strange and Dr. Doom. Although Strange technically wins, the prize is for him to help Doom with a task of his choosing; and that task is to help recover his mother from Hell.

What we learn along the way is fascinating. We get a glimpse of who Doom was before he put on the mask and the motivations for the actions he has taken afterwards. Doom is not your average villain, in fact, he might just be the most interesting character in the entire Marvel universe. Everything about him screams hero. His mother was a Gypsy sorceress who made a deal with the devil to remove a despot tyrant and his father was a medical doctor and after their untimely deaths due to the oppressive regime in his homeland, Doom dedicated himself to the study of the mystic arts and also science in order to relive the people of their subjugation. He rules over his land with an iron fist but everyone loves him. He brings peace to his kingdom but he hasn’t been able to bring peace to his own heart. He has struggled his entire life to somehow free his mother from the clutches of evil, and with the help of Strange maybe he can.

You figure he would bake in that suit.

The bulk of the book is Strange and Doom’s adventure in hell, which although entertaining, came second to the look into Doom’s history for me. The way they triumph over Mephisto–Spoiler–is also incredibly entertaining and telling of Doom’s character. The visuals of Hell are rendered expertly by Mike Mignola, who was born to draw demons, as evidenced by is later work Hellboy Everything has an otherworldly feeling, with sparse backgrounds adding to the sense of expanse that Hell has. My only real concern was the fact that at one point, once they were in the nether realm, it just seemed like they were going from fight to fight. They drop in, fight some demons, turn the page, fight some evil crows. All said though it wasn’t enough to make me put down the book. If you are a fan of what is going on currently in Marvel and you want to know a bit more about Doom, than this is a great place to start.