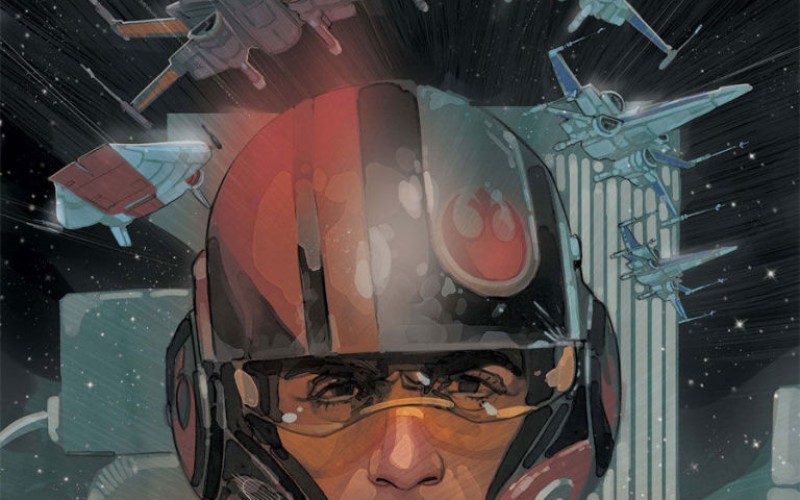 Not too long ago, in a comic shop just down the road…

Star Wars: Poe Dameron #1, is the third on-going series added to the current Star Wars cannon. It was released on April 6th by Marvel Comics. The series is written by Charles Soule with the art by Phil Noto.

Unlike the rest of the comics out right now, this story takes place the closest to The Force Awakens in the time line. This story starts 30 years after the defeat of the Empire. This comic is pretty much taking place before the movie starts. That is very exciting for any fan, mainly because of how little we know of events leading up to the current film. 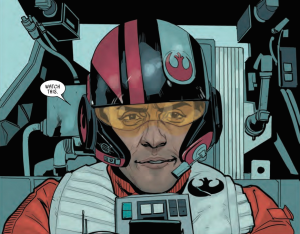 The comic starts with Poe on a mission to find Lor San Tekka. This is the man of mystery who gives Poe and BB-8 the information to Luke’s whereabouts at the beginning of The Force Awakens. Which is exactly why they want to find him. Leia is convinced that Lor is her only hope to finding her brother Luke, and that Poe is her only hope to finding Lor. It all makes sense to me. To aid Poe in his mission, General Leia tells Poe that he can assemble a team. Besides, what good is an ace X-Wing pilot without his squadron? Poe assembles five of his most trusted allies and the Black Squadron is born. Along with BB-8, Leia sends him off with some foreboding words about trusting his team. I got the feeling that this was some foreshadowing and there is a Judas among them to be revealed in the future? Hmmmm.

The comic looks beautiful, and reads well. I could hear Oscar Issac’s voice in my head as I read Poe banter with BB-8. I loved it. Everything flowed, nothing seemed forced. I really enjoy how this comic is going to tie into the movie. I also feel this is a great way for us to familiarize ourselves with Poe’s character until the next film comes out. I think this is a great addition to the Star Wars universe. My only dislike of this issue was the ending. After the story ends, there is another short story that seems to be a little adventure with BB-8 playing Cupid. I thought this was rather childish and even looks like a Sunday morning cartoon. I get that Star Wars is for all ages, but lets not try and please everyone at the same time. I thought the tone of the second, shorter story undermined the main story and its more serious feeling.

I have said it before, and I’ll say it again, I feel bad for people who don’t get new Star Wars on the regular. By this, I am referring to the many Star Wars comics.I give it a 4.5 out of 5, the comic is worth a purchase and as always I am excited for any new Star Wars comic. May the force be with you. 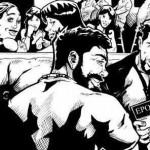 Somewhere between Batman and Han Solo. Greg Moser is a true fanboy from Kingston Ontario. A writer and a podcast host, a true poet.