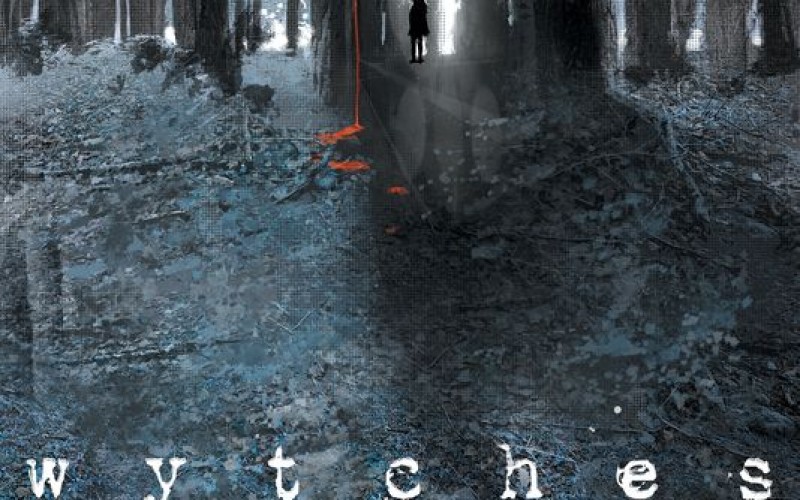 Wytches is written by Scott Snyder (American Vampire, Swamp Thing, Batman). Art by Jock (who has produced key art, concept design and promotional imagery for many projects including Christopher Nolan’s Dark Knight Trilogy, Man Of Steel, Children Of Men, and Hanna).  Colours by Matt Hollingsworth and Lettering by Clem Robins.

Scott Snyder loves mythological horror-creatures and is constantly reinventing them in the first six issues of Wytches. After talking to a friend that had visited Salem, Snyder came up with the idea for this story and made the decision to portray witches in a new light; a way to make them look different from anything we have seen before.

The story followers the Rooks family:  Charles Rooks, the father; Lucy Rooks, the mother; and Sailor, the daughter.  After Sailor’s school bully, Annie, attacked her in the woods and went missing one day, rumors started to emerge that Sailor killed her. Sailor still remains haunted by the incident, unsure of what actually happened that day in the woods, and what is currently hiding there.  Eventually, Charlie and Lucy decide that the only thing to do is to move the family to a new town, though they are unaware that the town has a dreadful secret, one where a person will pledge a person to a dark being that dwells in the forest.

If you love stories about mysterious entities hiding in the woods and carefully-kept secrets, then this is a must.  This character-driven story mainly follows Sailor’s journey, but much of it is devoted to Charlie as well. He’s constantly struggling with mental problems of his own as he tries to cope with a terrible car crash that left his wife confined to a wheelchair in the aftermath.

One of the main strengths of this comic is the artwork and colour, which enhances the impact of the story. Using a lot of spatted colours really brings the pages out and makes the woods and creature scenes much darker, but never overloading the pages so you can’t tell what’s going on.

Also, it’s not just the main story that makes this comic a great read, but the supplemental stories at the end of each issue, where Snyder tells a story about him, his thoughts, and whats happened to him and others around him.  Even though the stories aren’t mainly about wytches, they hold a undertone that helps shape and create aspects of the plot.

One of the supplemental stories that I found deeply-unnerving was about his son, who came home from school one day, scared and upset. He got up from class to get a drink of water and while he was away, an alarm went off signaling the threat of a shooting and triggering a lockdown of the classrooms, leaving him stranded in the hallway.  Unbeknownst to Snyder’s son, this was only a test, however, he was isolated in the halls – an easy target for a potential school shooter.  Since I reside in the UK, this was a foreign concept and I think this is why it was so shocking to me.

I just hope they leave these stories in when they release the hardcover.  It would be a shame if the readers were denied such strong supplemental content.

The first six issues shape the first arc, and after a break, they will return with more issues. I cannot wait to read the future issues because there really is a lot to explore in this world. I just hope they don’t wait too long to return. But with Brad Pitt’s movie company, Plan B, purchasing the rights to turn this into a major motion picture, it is apparent that this story will only grow bigger and get better.