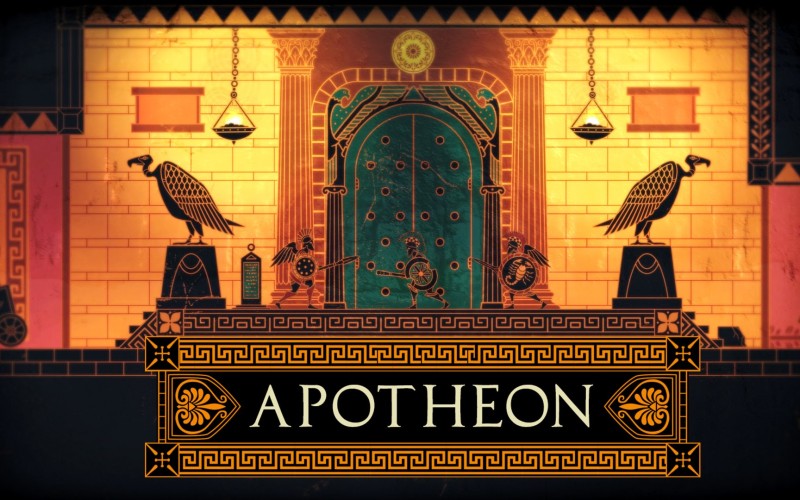 Looking at early press for Apotheon, it struck me as just another Metroidvania type action RPG from Alien Trap, makers of Capsized(2009). Now, I’d previously played Capsized and wasn’t blown away. I assumed Apotheon would be more of the same, but this time with a gimmicky art style. I was dead wrong.

Apotheon puts you in the boots of Nikandreos, a young warrior that wakes up to invaders ransacking his home town. After killing the leader of these invaders in what could be considered the longest intro level ever, Hera, the wife of Zeus and Queen of Olympus, tasks our hero with stopping Zeus. Zeus, King of the Gods, is finally done with the arrogance and pride of man and commanded the gods of Olympus to stop giving their gifts to humans. That means without the god of harvest, Demeter, the crops fail. Without the sun god, Helios and his flaming steeds, the world is thrown into perpetual twilight. Basically, without the gods and their gifts, mankind is doomed.

Hera has her own reasons of hating Zeus. If you know anything of ancient Greece mythology or watched The Adventures of Hercules in the 90’s, you know that Zeus is not the most faithful of husbands, nor is he discreet with his adultery. He bangs pretty much anything, creating new gods and demigods on a whim. Hera is understandably pissed and uses Apotheon to get back at him. She sends him to Olympus to kill the gods, steal their powers, and ultimately bring down Zeus. Sound familiar? If you have ever played any of the God of War series it should. A mortal is proclaimed a great warrior, then goes about killing the Greek gods and absorbing their powers in order to take down Zeus. Pretty close, I’d say. However, that is about as far as the similarities go.

While Kratos from the God of War series focused on using these godly powers as magic, Nikandreos is very much a melee fighter, using javelins, swords, spears, bows, and even a sling. There are a surprising number of different weapons and the developers did an excellent job making each feel unique. I found myself going out of the way to pick up new weapons just to see how they fared against the others. Weapons break as they come up against enemy shields and flesh, but they litter the ground everywhere, so I never felt the need to use the repair function or most of the specialty items Alien Trap built into the game. It also falls victim to the gameplay rhythm you often see in games like this where a few menial tasks must be done before you can face the next boss. To defeat Helios you must first do X/Y/Z, then boss fight versus Helios. To defeat Artemis you must first do X/Y/Z, then boss fight versus Artemis. Not the most engrossing way of playing but somehow it never got old to me. I always wanted to see what was next and how that enemy would be portrayed through the Greek art style. I played it for 5 hours straight and didn’t even notice.

Apotheon, despite having a name I had to Google (“exalted to the state of godhood”, if you were wondering), is a worthy entry in the Metroidvania style of games and holds it’s own against the greats like Castlevania: Symphony of Night. While the game does have some shortcomings, Alien Trap should be proud of what they created in Apotheon. It has everything a game like this needs to be successful, precise weapons controls, an intriguing (if not original) story, and uncensored satyr penis. Yes, really.