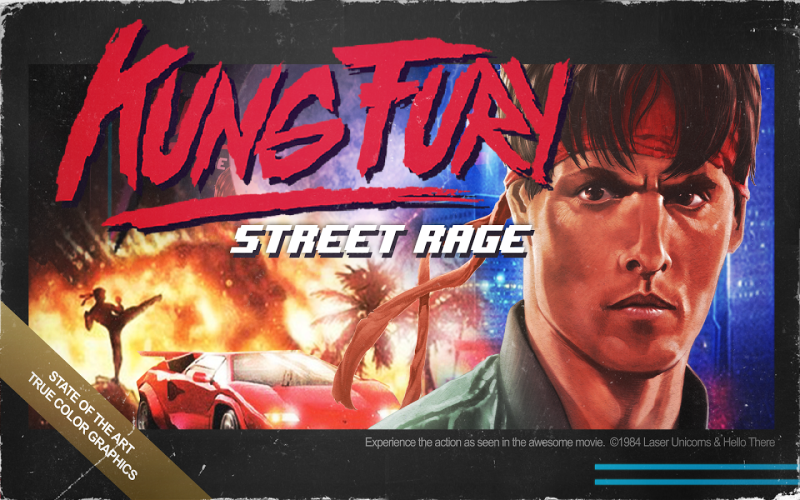 Unless you are one of the mole women from the Unbreakable Kimmy Schmidt(2015) or absolutely hate the internet, I’m sure you have seen at least the trailer for Kung Fury(2015). Starting as a Kickstarter campaign, Kung Fury is a cop movie reminiscent of the 80’s that is so over the top that it can’t even see the ground below. In fact, B&E’s 80’s movie wunderkind, Brian DeLaney, wrote a review of the short film that can be found in the movies section of this site. If you haven’t seen it, I would do that now. Like right now. Go.

Pretty cool, right? What most people don’t know is that Kung Fury also spawned a video game created by the Swedish studio, Hello There AB. So few people know of it that it doesn’t even have a Wikipedia page.

If you just finished the thirty minute long, neon pink, electric, Nazi killing, cop car kicking into the sky, thrill ride that is Kung Fury…calm down and lower those expectations. Kung Fury: Street Rage shares all the futuristic retro heart but none of the heart pounding Fury. While the name is indicative of the side scrolling beat ‘em up Streets of Rage(1991), it plays more along the lines of One Finger Death Punch(2014). The player uses only two attacks, left and right, to decimate the Nazi’s, sexy teleporting nurses, and giant robots that slowly trudge toward you from the left or right. Think of it like DDR but with only two directions to press. Each button press makes the character throw an attack in that general direction, but alternates between simple attacks and something with a bit more flair. I have to admit, the first time a Nazi soldier’s head popped like a watermelon, I laughed out loud and scared my dog. Keep these foes at bay for long enough to build up a bonus multiplier and get on the leaderboards.

It sounds undemanding, but mismanaging the horizontal space makes it quite easy for the enemies to overwhelm you. Especially once you start getting different enemy types. Your average Nazi grunt, for instance, dies quickly with a rabbit punch to the face. Another Nazi, differentiated by their blond hair and presumably blue eyes, dies with two hits. The sexy nurse, however, does a vanishing routine once hit that always has her at your back. Giant robot takes, you guessed it, 3 hits. It gets very difficult, very quickly, but is not what I would call an immersive gameplay experience. What Kung Fury: Street Rage does very well is cover a simple game play mechanic with what made the film great, techno/chip-tuned music on top of 80’s retro cop on Nazi action. The game lacks replayability and doesn’t even have an online leaderboard so you can track your friends scores. Without this, these types of unending, unbeatable games not only lack replayability but also playability. With no one to compete with but myself, I didn’t want to play any more. I did appreciate it for what it is, but I can say right now that I will never play it again. At least until nostalgia strikes that is.