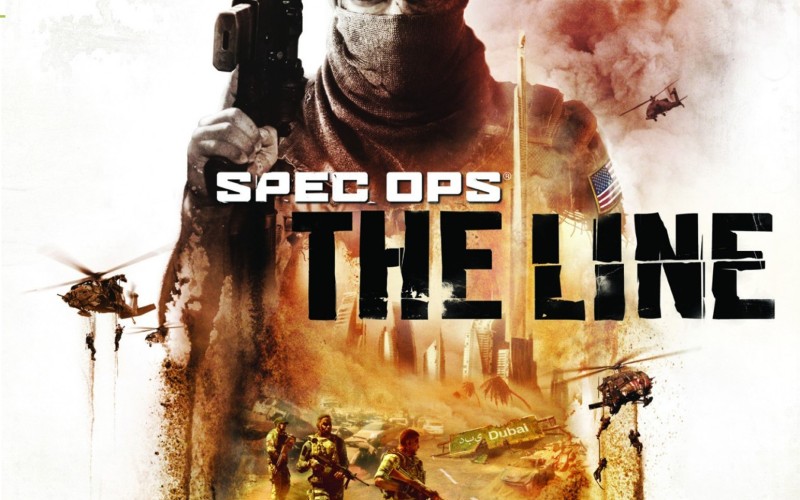 Hi, my name is Rodney and it’s been over a week since my last review. During the last few days, I’ve caught myself scrolling through my list of games, from 3SwitchD to Zombie Driver HD, not knowing which game to choose next. I have hundreds of games to choose from, but like any adult with more money than time, a lot of those have gone unplayed. So I chose a game that I had heard nothing but good things about but never gotten around to actually playing.

Spec Ops: The Line debuted in 2012, and is the next game in the commercially and critically panned Spec Ops series you probably don’t remember from the Playstation days. In the four years between 1998 and 2002, 9 games were put out under the Spec Ops name and each were immediately condemned to the bargain bin.

Thankfully, 2012’s entry in the series carries nothing from it’s predecessors except the generic sounding name and the ludicrous idea that three men can take on a whole army and win. The main character, Walker, and his team mates, Lugo and Adams, are tasked with finding Colonel John Konrad, the leader of a defected battalion of soldiers, and helping the people of Dubai that are caught in massive sandstorms that have been destroying the area. The city has been buffeted by these mammoth storms for so long that much of the city is covered by sand, and civilians are fighting for their lives. The developers don’t shy away from the fact that this is loosely based on Joseph Conrad’s “Heart of Darkness”, cleverly naming the main villain Konrad. Once you get used to the beautiful, surreal setting of a modern city engulfed in sand, Spec Ops: The Line plays like many other shooters. Enter an area, kill a bunch of enemies, move forward. The gameplay comes off as a bit unremarkable for as much effort they put into other areas of the game.

But look at that view.

Throughout the campaign, the actions of you and your squad have a tremendous effect on the people of Dubai. This game shows the dirtiest and most pure depiction of war, where there are no good or bad moral decisions. Every part of war is gritty, ugly, and full of death and each choice brings pain and suffering to your unit and the civilians still trying to live in the city. Each of those consequences, no matter what choice you make as a player, is emotionally jarring. Spec Ops: The Line makes you run an emotional gauntlet, allowing the player to kill hundreds of enemies but then showing how much different you feel once an innocent dies, and it is your fault. And, spoiler alert, innocents die in this war in the desert, and not well.

Spec Ops: The Line does do a lot of things right…almost all the things right. They show the grittiness of war and how it changes the soldier fighting. Walker and his unit show physical damage as the story plays out, starting as all chiseled chins and rippling muscles. By the end, they are physically and mentally drained, covered in burns, bullet wounds, and have the Sahara worth of sand in ALL the most uncomfortable places. I applaud Spec Ops for creating such as interesting setting for killing unending waves of bad guys in. I’ve never wanted to go to Dubai (or anywhere in the United Arab Emirates for that matter) but this game makes it look so alluring that…nope. I still don’t want to go.