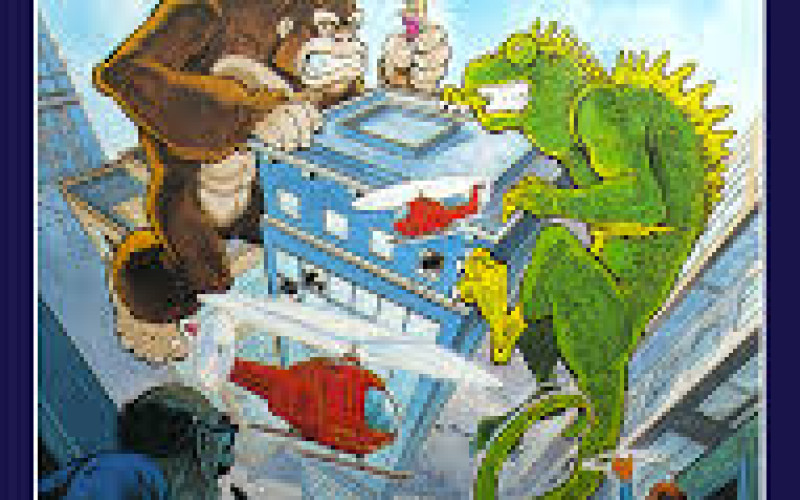 Like any child of the eighties, I played the dogshit out of my Nintendo when I was young. And while most video games were just a flash in the pan, there were a few mainstays: Super Mario Bros, Contra, Tetris and Rampage. These were the titles that I could play over and over for hours at a time; these games helped define my youth and I hold every single one of them near and dear to my heart.

Recently, there has been quite a bit of buzz about Dwayne “The Rock” Johnson starring in an upcoming film adaptation of Rampage. Don’t get me wrong, the possibility of more monster movies really excites me, but even this little tidbit of news causes me a bit of worry. Why? Because the ideal adaptation of Rampage would be a film that is dripping from head to toe with an ironic sense of fun: a film where a giant ape and an enormous lizard wreck a sizable metropolitan city, devouring anything and anyone that gets in their way.

I’m calling it now. THIS WILL NOT BE THAT FILM.

This is going to be The Rock’s film through and through. The fact that kaiju will be the main antagonist will provide some interesting scenes of destruction, but it will definitely be treated as any other interchangeable danger. And even though it hasn’t started production yet, I already feel like I have already seen this film because it practically writes itself. The Rock’s character’s family will be threatened or possibly separated due to the monsters, and maybe a secondary family member will die in the process, but don’t worry about the main character because the protagonist will never really be in harm’s way. Disbelief will be suspended through a few scenes of mass destruction, but The Rock’s character will definitely kill the monsters and save the world in the process. Make no bones about it, there is nothing different about this than any other big summer tentpole movie. And that sucks.

Maybe it is because I obsess over horror, cult, and other offbeat films, but I am really tired of the summer blockbusters that never deviate from the other slew of big budget formulaic films. Especially the films that are fueled by nostalgia. It’s as if Hollywood has figured out that the perfect formula: pick an old fan favorite, throw in a big star, trickle in special effects in every shot, and put it out in wide release with the option to view it in 3-D. And when the numbers start to slow, its time for a remake.

Maybe I am just jaded but it is frustrating to see interesting concepts opting to go through the crowd-funding method to get new ideas made, only to be released on DVD (if they’re lucky). Meanwhile, the same old formulaic garbage is pumped down our throats and we eat it up week after week.

Something has to change.

The studios need to rely on new and innovative ideas instead of pumping all of their cash into making big-budget films. Likewise, we as the audience, need to demand to see thought-provoking, complex cinema in the efforts to provoke another auteur movement.

Films like Whiplash and A Most Violent Year are a pleasant surprise, but their box office totals were just a trickle compared to the cash flood generated by the popcorn-cinema giants. And why is this? Because they didn’t get a massive release upon their initial run due to limited cinematic real estate. After all, who needs a screen tied up with true genius when it could be used as an optional 3-D screening for the big budget films?

These massive blockbusters are kind of like candy. They are fun to consume every once in a while but by flooding the market with these titles, the audience is denied true sustenance. And unless something changes fairly soon, look forward to seeing a reboot of The Avengers in five years followed by the big-budget adaptation of Excitebike.