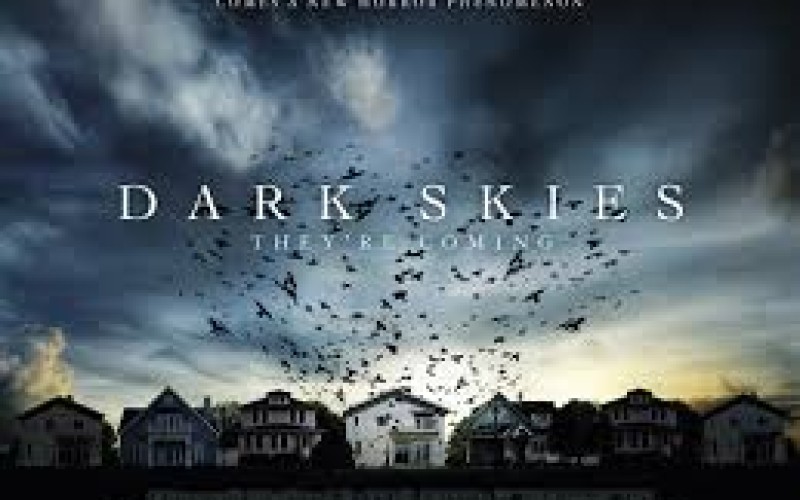 I browsed through my Netflix queue searching for something that I have not seen and Dark Skies seemed like a good fit, given the fact that Tropical Storm Bill will be pounding my neighborhood with torrential rain.

Prior to viewing this film, I remembered three things about this film. First, I recall that it seemed to jump in and back out of theaters in a matter of a week or two. Second, I remembered that the trailer climaxed with Joshua Hamilton turning around to greet his wife with his mouth agape and a terrified expression glued to his face, similar to the victims of the alien attacks in the horrible film, The Fourth Kind. Last, I remembered that it was a PG-13 release, which is always an instant turn off for me when it comes to theatrical horror releases.

After watching I am really happy that I jumped into viewing this title with no more knowledge of the film.

The film begins with the Barrett family facing money issues and a looming tension between Mrs. Barrett (played by Keri Russell) and her husband (played by Josh Hamilton). Their eldest son spends his days  running with the wrong crowd while his younger brother claims that he is haunted at night by a mysterious visitor named “The Sandman”. After a few weird occurrences happen in the middle of the night, it becomes clear to Mrs. Barrett that there is truth to her youngest son’s claims of his nighttime visitor, much to Mr. Barrett’s chagrin.

Though I wouldn’t go so far as to praise this film as a modern classic, it is also not the pile of dog shit that I was honestly expecting. It is an enjoyable film where the tension takes over the reins in the middle and doesn’t let up until the climax. The pacing is somewhat slow, but it definitely built tension, and the suspense worked best when it wasn’t actively showing the visitors (which looked a little too stereotypical to be truly iconic). Also, strong performances by Keri Russell and Josh Hamilton helped ground the story in reality.

If you have avoided this film due to its PG-13 rating, you can rest-assured that nothing felt neutered. There are no truly intense scenes of gore, but its subdued plot never seemed to call for it in the first place. The tension of this film is not in its kills, it lies solely in the truly frightening possibility of an uninvited visitor threatening to drive a part the sanctity of the family, ultimately culminating in an unsettling and somewhat depressing climax.

I would not hesitate to recommend this to fans of films like Fire In The Sky and Signs. Though it may not be as iconic as those films, it is a much better-than-average addition to a somewhat underdeveloped horror subgenre.