“What a beautiful way to die, as a falling star.”

I was told that John Carpenter’s 1974 cult classic Dark Star was a comedy. I am not actually sure if it was or not. Sure, there some comedic moments, but ultimately the film felt like a commentary on the negligence and sloth that can be the other side of the coin of progress. Dark Star is the tale of the crew of the titular deep space scout ship on a mission to pave the way for colonization missions by using sentient bombs to blow away planets that could, eventually, become a problem. What struck me the most was the vision of the future, absent was the sense of exploration of a series like Star Trek or the shear wonder of what is to come from 2001: A Space Odyssey. No, in Dark Star you get a gritty, pessimistic view of the future. The crew handles their job like the average teenager working a dead-end retail job. The ship is falling apart and constantly needing repairs, they lost their supply of toilet paper, no radiation shielding, and the worst part is those in charge who sent them out their do not want to spend the money on a resupply ship. And on top of all of these technical difficulties, their commanding officer was killed in accident. 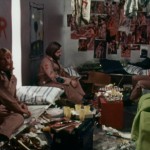 Notice the reverence for the fallen comrade.

The crew treats the ship like a college frat house, with refuse and porn all around their living quarters, target practice with lasers in the hallways, and keeping aliens they found in storage areas. They only joy they seem to have is when they actually get to blow up a planet or two. Over the course of their 20 year mission, the men have become increasingly distant towards one another. Attempts to increase morale among the crew by Pinback (Dan O’Bannon) are all in vain. The film effectively portrays the loathing that living in such close quarters would cultivate, you really get the sense that these characters really don’t want to be there. 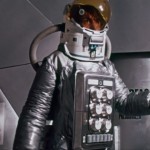 Dark Star had some genuinely interesting sci-fi concepts, even if some of them were taken directly from the pages of Bradbury and Dick (the scene with Commander Powell comes from a Philip K. Dick story, and the ending straight out of Bradbury) The idea of a sentient bomb is an intriguing one, that has been used many times since, but does beg to question: why? The scene near the end with bomb number 20 is fantastic. And of course most people know that the sequence with the ship’s “mascot” evolved into another Dan O’Bannon movie, Alien.  There are other unanswered questions that arise from the movie. Over the course of the film, insights into Pinback and Dolittle’s backstories are alluded to, but unfortunately not expanded upon.

The movie is very low budget which may turn some people off, but the story doesn’t suffer from it. If you can ignore the fact that the cockpit is made of illuminated ice cube trays and the space suits use children’s toys as helmets, you will find Dark Star a uniquely fatalistic take on the future of man and the nitty-gritty of space colonization.