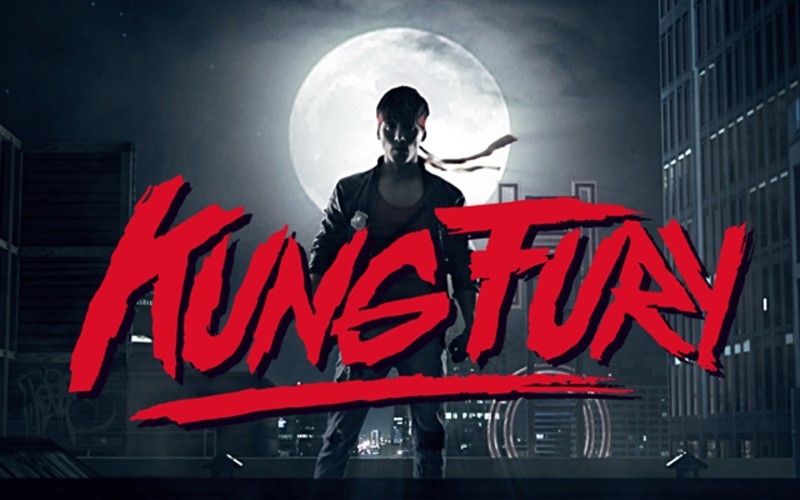 “That explains the Laser Raptors.”

How does one begin to describe the sheer spectacle that is David Sandberg’s ode to 80’s nostalgia: Kung Fury? I am not sure you even can. Before the first two minutes are up you have Miami Vice-suits, arcades, rooftop-dojos, saxophone solos and cops who are karate experts; it’s like Sandberg took everything wonderful about eighties action movies and threw them into a kickboxing ring to let them fight it out.

The plot is simple. Hilter is comes back from the past to claim the power of Kung Fury, which our hero gained in an origin story worthy of Eastman & Laird complete with his very own fingerless gloves and supernatural karate powers, for himself so our hero goes back in time to stop him in the past. It basically boils down to: take down the bad guy. But if we can be honest here that is not what anyone is watching this for. What I and everyone else came to see was over the top action and ridiculousness that only the “greatest” movies of 3(!) decades ago could muster.

Did Kung Fury deliver? I will be honest, I didn’t laugh much but that was only because for a solid thirty minutes my eyes were glued to the screen never knowing what I was going to see next. Legendary origin story? Ridiculous fake 80s computer hacking? Synth heavy sound track? Girls with gatling guns riding dire wolves in a scene that is straight out of an issue of 2000 AD or Heavy Metal? Kung Fury has all of this and more which I cannot bring myself to talk about or else I would ruin the twists and turns for everyone.

As well as being a trope encyclopedia for 80s Kung Fury also recreates the experience of watching tapes worn down from sheer awesomeness in your VCR. There are tracking problems, black outs, and audio clipping, all of which took me back to when I was a kid ruining bootleg copies of Commando. The closing fight scene is evocative of old side-scrolling beat-em-ups like Streets of Rage or Double Dragon, where our hero is mowing through an entire army of Nazi soldiers in a decidedly linear fashion. While the bad guys take Kung Fury head on one-on-one like this was American Ninja, the rest of them stand in the surroundings recycling the same few moves like a Street Fighter II background character.

If you have any sort of sentimental bone in your body for a time when kung fu was done with plenty of splits and cops were always playing by their own rules then there is no reason not to watch this martial arts masterpiece.