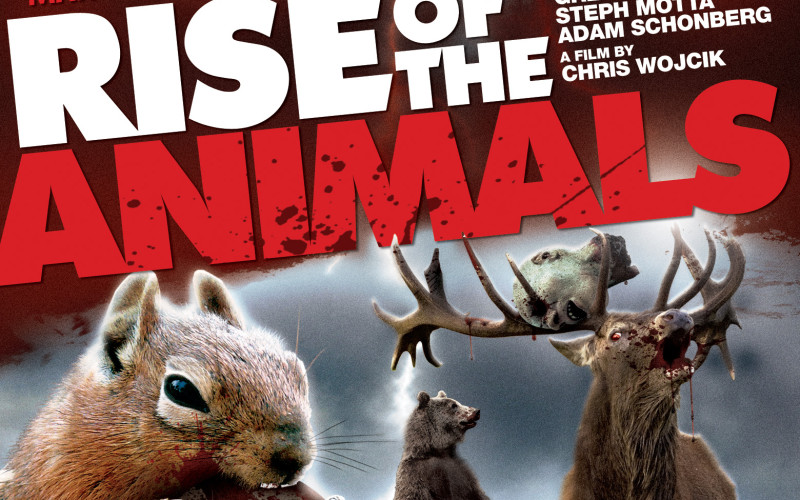 Let’s get one thing straight before we start the review: you don’t watch a movie like this for the plot. You watch a movie like this to see horrible things inflicted on people by animals. From the very beginning that is exactly what you get with Rise of the Animals. The film revolves around a pizza delivery guy, his close friend, and the friend’s sister. After failing to make a movie on time, the delivery man, Wolf, and his pal, Jake, arrive at the most legitimate party I have ever seen on camera; and by that I mean, possibly the lamest. If you think about it though, the depiction might not be that far from the truth for a small town setting in rural New York. There they find Jake’s sister, and the girl of Wolf’s dreams. The next morning, awaking from a night of awkward almost-sex, Wolf is startled to find his love interest gone, and when the local fauna start to attack the only thing on his mind is making sure she is safe.

The rest of the movie is a road-trip adventure to find his lost love, along the way we are treated to a host of killer animals, from deer and horses, to a bear and at one point even a kraken. Rise of the Animals does have its flaws though, the movie is incredibly low budget, coming in at only around $7,000, so there is much to be desired in the way of special effects, but in a way, that’s where most of its charm lies. The film makes liberal use of hand puppets, stuffed animals and CGI that was clearly rendered on a home computer but throughout it all it delivers an entertaining experience. The majority of the script was most likely:

But that doesn’t stop the main characters from delivering an actual performance. If you can look past the less than shiny veneer of a movie with extremely DIY special effects, what you are left with is  a humorous movie that a group of friends would enjoy.