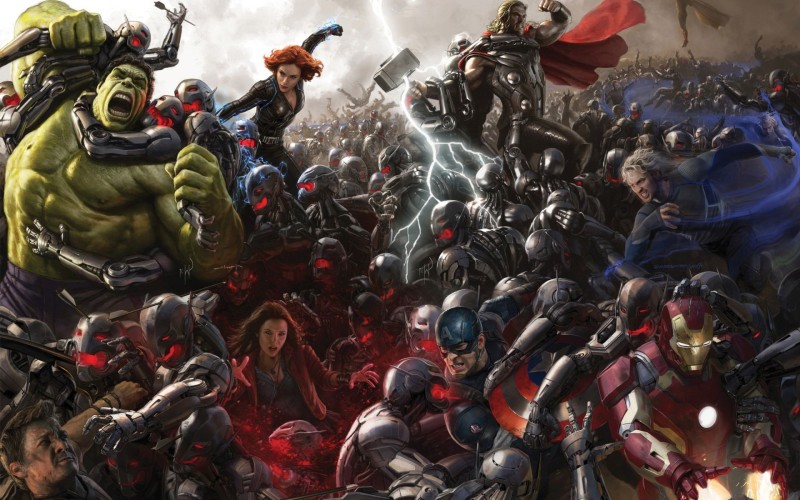 Please forgive me if my review is a bit late. I was out of the country in a place where internet is two dollars a minute. So just play along with me and pretend that it’s May 1st, 2015. You haven’t already seen the movie. You aren’t wearing underwear with Iron Man saying “You make me as hard as armor” or whatever. You haven’t spent your hard earned weekend trying to find one of the Useless Arrow Hawkeye figurines at Toys R Us. Just close your eyes, and pretend it’s opening weekend, for my sunburned skin’s sake. Then open your eyes. After all, you can’t read an article with your eyes closed.

Last night, after the crowds had dwindled and my local theater stopped smelling like nerd sweat, I finally got a chance to see the latest Marvel movie, The Avengers: Age of Ultron.

The Avengers (2012) brought together all the Marvel heroes you love (as well as Black Widow and Hawkeye) and begins the road to the Infinity War Saga. The first half is slow and meandering, showing Loki as a pawn used to open up a wormhole and let in the Chitauri, an alien race dead set on making New York a parking lot. The Avengers are the only people powerful enough to stop the Chitari from destroying Earth and taking the Tesseract to Thanos, the mad Titan and future star of the Infinity War Part 1&2 due in 2018 and 2019. This rambling beginning is spiced up only by the comically stereotypical maneuver of misunderstandings and short fuses, causing our heroes to swap blows. As a sharp contrast to the first hour, the last hour is arguably the most exciting 45 minutes in cinema history and I may or may not have cried at the end. Rating: 4 out of 5. Surprise bonus review for The Avengers.

Avengers: Age of Ultron picks up a few years later and introduces the cinematic version of (spoiler) Ultron, a sentience found in the Scepter, also known at the shitty excuse for a plot-driving device used by Loki in the first movie. The big bad of Avengers: AoU is the physical manifestation of an AI as an 8 foot tall angsty teenager with a deep hatred of Tony Stark, his father figure. Ultron is voiced by that gravely voiced god, James Spader, in one of his most menacing roles yet. He is created to be an ultra intelligent machine made for good, but quickly decides that everyone must die or evolve to be worthy of living on the future Earth. But it’s his precarious relationship with Tony Stark that is the driving force in the film.

Ultron jumps from a confident evil villain, full of power and breadth, to a child sent to bed before supper in the blink of an eye. He hates being compared to Stark and hates that he was created by him even more. This flaw, and the irrational state it sends Ultron into, means every plot he masterminds seems to completely backfire. The allies he finds in the newly introduced Scarlet Witch and Quicksilver quickly abandon him. The vibranium robot he builds to become his new, indestructible body is soon beating his ass as a new Avenger, the Vision. He is the least successful villain in any Marvel movie, only managing to destroy one small town in eastern Europe. Eastern Europe. Not even western Europe? I’m surprised that Nick Fury even sent anyone. I mean sure, if Ultron had succeeded in his attack, it would mean a new ice age, killing all the humans…but I think my point stands.

As I’m sure you all know, because we are all still alive, the Avengers win. Ultron doesn’t even get the dignity of an on screen death. Why can’t Marvel bring back the really cool villains, like John Travolta from The Punisher (2004)? No one is more fear inducing than John Travolta in a wig. Also, why do they introduce so many new characters (Vision, Scarlet Witch, Quicksilver, Klaw) but none of the ones I really want to see. Where the hell is Luke Cage?

All my bellyaching and moaning doesn’t change the fact that this is a Marvel movie and it made a bajillion dollars for the rat at Disney, and deserves to make a bajillion more. The Hulk vs. Iron Man fight teased in the trailer was worth the price of the ticket and stale popcorn alone. The action is awe inducing, but it had to be pretty amazing to make up for the love story between the Hulk and Black Widow that no one asked for. Other than that small blip and some pacing issues it’s what every Marvel movie should be.  The effects are everything you’ve come to expect from an Avengers movie, and it had enough nods to other Marvel properties to appease even the most critical nerd. Believe me, cause I am one of them.  All in all, another exciting foray into the Marvel universe and one I’d gladly take again.