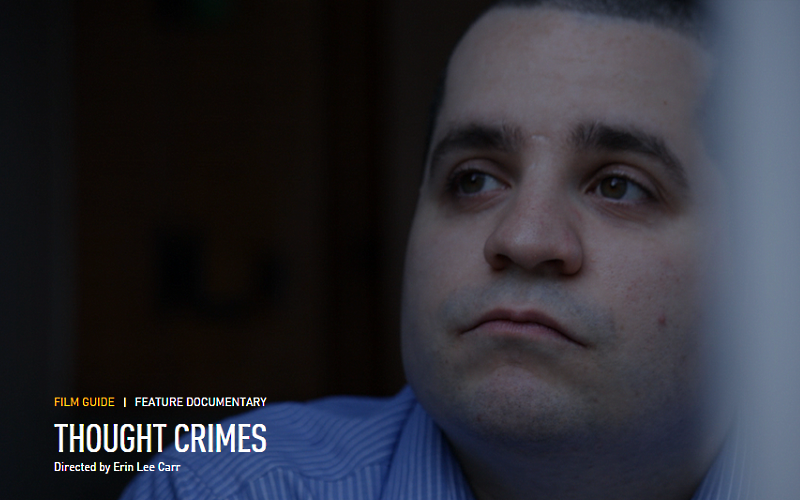 Thought Crimes, a new documentary from HBO, is an examination of the case of the NYPD “Cannibal Cop” and the potential legal ramifications arising from this case.

Now, I will be the first to admit that I was completely unfamiliar with this story (even though it apparently made national news and tabloid headlines), but the documentary caught me up to speed quickly. New York Police Officer, Gilberto Valle, faced charges for conspiring to kidnap multiple women and eat them.

Apparently, the thought of cooking women and eating them was one of his fetishes and he spent an inordinate amount of time on kink/BDSM websites talking to like-minded people about his plans.

Rather than building a narrative that implied that he said some nasty things on these chats but never actually showing much of his chat logs, this documentary did not skimp on the horrifying details. I would say that a good 10 minutes of the film is excerpts from his chat history, which read like a mix between Hannibal Lector and a bad Vincent Price character. Seriously, every time he chatted about something exceptionally macabre, I couldn’t help but think of Bill Hader’s spot-on impersonation of Vincent Price.

As time went by, his chats went from being vague to becoming much more specific, with actual subjects/intended meals from his own life. Thus, the lines between fantasy and reality were beginning to blur.

So was he caught by a cyber-cop that infiltrated this network of would-be-cannibals? Or maybe it was the NSA? Or even the president himself? Nah, nothing that exciting. His wife wanted to see why he spent so much time online so she installed a key-logger and history tracker. When his “interests” were exposed, his wife immediately freaked the hell out, left him, and turned him in. Understandably.

This is where this case becomes a true touchstone.

His wife was right for turning him in and justified for not wanting to be around him, but the bottom line is that he committed no crime, other than being a creepy piece of shit. Valle’s defense is that chatting about kidnapping and eating women is actually a fetish of his, which should be clear since it played out on fetish websites. Also, he claims that there was never any real-world intent on hurting anyone.

Unsurprisingly, when this case went to court, he was convicted of misuse of police databases and conspiracy charges. The conspiracy conviction might be because juries in America still haven’t gotten the whole guilty-beyond-a-reasonable-doubt thing down. There are a lot of gut feelings at work when these verdicts are being delivered. Also unsurprisingly, the judge later threw out the conspiracy charges, which the prosecution is currently seeking to get the reinstated.

The bottom line is that if those conspiracy charges stick, then the precedent has been established so that the future of American justice could very similar to the dystopian world from Minority Report – a future where people could be tried for future crimes because their Google searches show a propensity to commit a crime.

Bottom line: This is a very entertaining and thought-provoking film. It appears that director, Erin Lee Carr, is attempting to present all sides of this extremely-complex case as fair as possible.

If you are a fan of true crime or documentaries then I strongly encourage you to check it out.