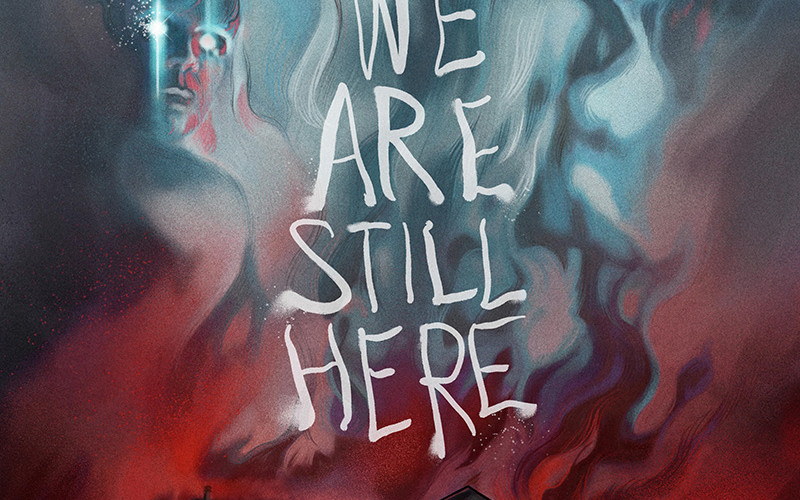 We Are Still Here is a new horror film that draws inspiration from the films of the seventies to deliver an intense vision of terror. Either this is a case of catching lightning in a bottle or Director Ted Geoghegan knows exactly what he is doing behind the camera and is seemingly-able to stretch every dollar like they’re made from rubber.

Now before we get started, I want to emphasize that this film is not for everyone: the plot lacks clarity, the acting is occasionally stiff, and the gore is much more intense than expected. So why am I so impressed with this? Honestly, it’s because this is THE film that true horror fans have been waiting for! It is a unique hybrid of slasher films and ghost stories that never really fully-commits to either, but instead, creates its own little unique vision – one influenced by Fulci and Lovecraft, but nonetheless completely original.

In a nutshell, the story follows Anne and Paul Sacchetti, a married couple that moves into a new house two months after the sudden death of their only child. While Anne cannot shake the feeling of a presence in the house, Paul focuses exclusively on the secular, writing off the supernatural, and searching for consolation at the bottom of a cocktail glass. When Anne’s spiritually-inclined friends (a.k.a. Hippies) pay them a visit in hopes of cleansing the house of any potential entities, the results are monsterous.

Honestly, the plot can be a bit sparse at times, opting on slow-pacing and interesting videography to fill in the void, but the execution is utterly-satisfying. Like much of Fulci’s catalog, the strength of this film is based on style rather than substance, but the monster design and use of practical effects are like a refreshing visit to the horror titles of the past. And while this is not a gore film at heart, it is graphic enough to satisfy any gorehound with discerning tastes.

On the other hand, if you are looking for a truly scary and unnerving film, you might want to keep looking. This film seemed to be made by a director with full-grasp of horror history, but it never truly delivered any scares that shook me to my core. This is probably because the decision is made early on to show every inch of the ghosts and their resulting carnage in all its crimson glory instead of shrouding the entities in a veil of mystery, leaving the audience to use their imagination to conjure up true fear. Again, this is not a bad thing, just another unique decision taken in this decidedly-different ghost story.

Only once every few years are the true fans of horror treated to such a game-changer. In fact, the last film that immediately left this much of an impression with me was Ti West’s The House of the Devil. Though We Are Still Here is not quite as strong as that film, it still packs a satisfying punch and I would not be surprised for this to find its place in the cult classic hall of fame!

Catch it now on VOD!