I watch a lot of horror films, and with the current trends, I stumble across more than my fair share of found footage movies. It seems that this has been very popular in the horror community for the past decade because it allows films to be made on the cheap.

What sets The Houses October Built apart from the pack of other found footage films is that they have found a way from the beginning to overcome the true downfall of the found footage framing device: the ending.

Then it does something so simple, yet so incredibly effective, that it seems a crime that I have not seen this utilized before. It explains that most of the following footage was shot by five friends on an extreme haunt trip but that the rest of the footage was allegedly shot by the crew of the Blue Skeleton, an underground haunt with no fixed location.

This seemed to be a promise from the beginning that this film will not end with what I like to call the dropped camera effect – I’m looking at you Blair Witch, Cloverfield, and The Last Exorcism. Instead of just randomly cutting to black and leaving an undertow of ambiguity, it allows the film to show a character’s demise from an alternate point of view.

Now, the plot of this film is pretty simple: five friends document their experiences in trying to find the most extreme haunted houses on the days leading up to Halloween. Much of the beginning appears to be interviews with the real crews of real haunted houses along with a walk through of each haunted house. As they keep chasing their way through the multitude of haunted houses, they make a few enemies along the way that they can’t seem to shake off… one of which being this pants-shittingly-creepy porcelain doll girl. 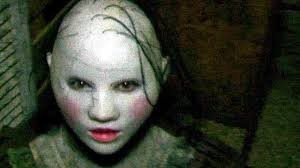 Rather predictably, the film teases at upcoming horror by ramping up the tensions on the days leading up to Halloween, each horrific event hitting closer and closer to home. I don’t know why I found this troublesome. To me, it would be more jarring to let the chaos begin early or late, but the convenience of it all wrapping up on Halloween kind of seemed a little too convenient for killers with such a lack of motive.

For a few small things that this film does wrong, it gets a lot right. It manages to create some very realistic dialogue and believable friendships between these characters. Additionally, the characters are all pretty likable, which is always a plus.  Another strong point is the various characters that the protagonists run into. They could have skimped on this because these are supposed to be people that work in a haunted house, and by all admissions, most local haunted houses are not going to win any makeup awards. That said, keeping the character makeup and effects very tight, helped to serve the story by offering a glimpse into the psyche of what these haunt show workers want to project themselves as. Also, the editing is crisp and provides the film a great sense of pacing.

I do not want to get into spoiler territory, but I will say that this film is extremely grim and somehow found a way to genuinely creep me out. The story flows from carefree days spent with friends to one of the most gripping, memorable, and ultimately polarizing endings that I have seen in a while.

As of May 7th, 2015, this film can be seen on Netflix Instant Viewing.